PD Vadar a force till the end

After five years of tracking criminals, Waikato Police dog ‘Vadar’ is retiring from operational service, but not before putting the bite on a burglar in one of his very last jobs.

The seven-year-old German Shepherd is being sidelined from frontline duties after a series of health issues, including surgery for lumbosacral disease in January.

Four months post-surgery, NZ Police says Vadar has developed a “bit of a wobble” in his back end and further investigation has led to a diagnosis of Degenerative Myelopathy (DM). DM affects the spinal cord, resulting in slowly progressive hind limb weakness and paralysis. The condition is not painful but unfortunately there is no effective treatment.

Senior Constable Kieran Goodhew has been Vadar’s handler since he was two years old. Former handler, Andrew Grylls-Thomas trained and graduated Vadar prior to leaving NZ Police in 2017.

“Two offenders had pointed a shotgun at a victim before firing it and running off over farmland,” Police said in a statement.

“Vadar tracked the offenders for a couple of kilometres before indicating that they’d crossed the river. He was transported across the water by Eagle, then relocated the track and followed it over 5.6 kms through bush and farmland in full AOS kit, to eventually apprehend both offenders. Without his stamina and dedication, they wouldn’t have been found that night.”

His handler says Vadar is reliable, loyal and has a strong bite. He’s bitten through numerous pieces of equipment in his time, but in his downtime, he’s a loveable, social dog, he says.

“He loved his job and loved to catch offenders,” says Snr Const Goodhew.

In 2019, Vadar received a certificate of excellence in his annual certification – a rare achievement based on a dog’s obedience and ability to carry out a number of tasks flawlessly.

He also finished his working career on a high – catching a burglar during his final shift.

So what now for Vadar? 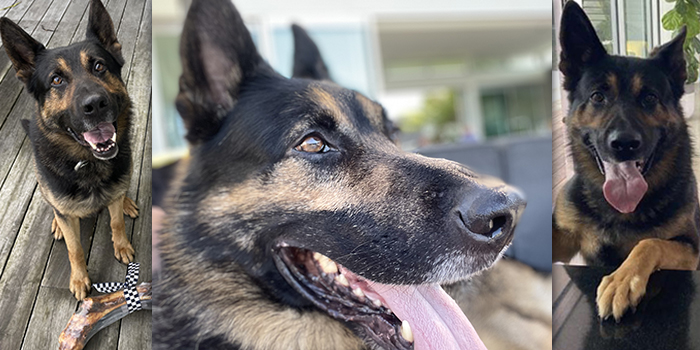 “He loves a school visit and getting pats from kids so no doubt there will be a few more of those to come.”

As for his handler, he is now training 18-month-old ‘Fynn’, who certainly has big paws to fill in the wake of Vadar’s retirement.