NZ Police has farewelled Auckland’s first dog handler, Graham Bracey QSM, who passed away peacefully earlier this month at the age of 91.

Mr Bracey QSM will be remembered for his professionalism, strong personality, love for his family and “his liking of tomato sandwiches”, NZ Police said in a statement.

Family and friends gathered to celebrate his life at a relaxed service in Whangārei on Friday 22 July.

Graham’s ashes were carried by his son, Paul Bracey, who was followed by family members through an honour guard made up of officers and dogs from the Auckland and Northland dog squads.

As his family and friends recounted stories involving Graham, the sound of barking dogs echoed around the Town Basin as they waited, not so patiently, in vans parked outside the venue.

The canine cacophony seemed fitting for a man who was Auckland’s first dog handler, with his partner Duke. At the time, there were just two other handlers operating in the country – one in Wellington and the other in Christchurch.

Police dogs were brought into New Zealand in 1956 and were slowly deployed around the country. Graham joined Police in 1955 and was given Duke to train in 1958. A year later they became operational. 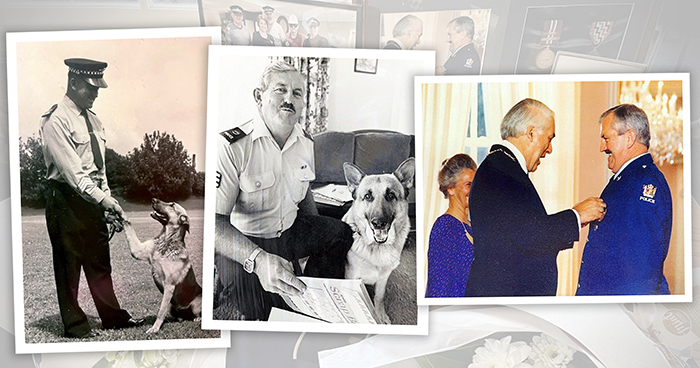 NZ Police says Graham paved the way in his policing patch, covering an area from Taupō to Kaitaia with his loyal dogs.

Duke was the only operational dog in Auckland for four years, so they were kept busy.

“Dad had some wonderful memories of Police and he loved his dogs,” says son, Paul.

“He loved the dog section. He helped train the handlers and their dogs and he would be grateful to see the respect you showed him today.”

Graham’s friend, retired Detective Joe Sheehan, recounted a job he attended with Graham and Duke as they searched for an escaped prisoner from Pāremoremo.

“Graham turned up with Duke and I said ‘He’s taken off through the gorse’.”

The men weren’t too keen on ploughing through gorse, so Duke was sent off to find the prisoner.

“In a few minutes there was howling and screaming. Graham said ‘Right, he’s got him. All we have to do is go and get him’.”

Region Dog Coordinator, Senior Sergeant Peter Pedersen, based at Ellerslie, trained under Graham – who he described as “a very special man and a thoroughly professional Police officer”.

“Graham had a very strong personality and he made sure we toed the line – and if we didn’t he explained in no uncertain terms that we had to sort our act out,” he says.

“Graham pioneered the dog section and tolerated the hardships back in those days and the kind of complexities that were involved in transport and communications. Things we don’t suffer so much now.”

He says in those early days, if a dog and handler were required for a job, they were collected by investigating staff.

“That meant riding around in the back seat upsetting the CIB guys in their flash suits … they didn’t like dog hair and of course dogs smell when they’re wet.”

In training, he says Graham was a stickler for the dogs being well presented and no dog ever went on a course that wasn’t up to scratch.

In a media interview in 2017, Graham summed up his Police career: “New Zealand Police is a wonderful organisation and every effort is made to keep peace. I was blessed with a very wonderful and exciting career,” he said.

He retired in 1989 and was awarded the Queen’s Service Medal for public service.

To our dear friend, rest in peace – NZ Police.