Police walk to honour the brave

A powerful, permanent tribute to the outstanding courage and achievements of Police staff is taking shape at the RNZPC.

He Toa Taumata Rau (The Place of Many Brave Deeds) will tell the stories of operations and events which led to the award of royally warranted bravery honours to members of Police and the public.

It will take the form of a walkway of decorated pou – co-designed with Ngāti Toa Rangatira – along a path in the college’s lower grounds, below the New Zealand Police Museum and within sight of the road.

“It’s a way to showcase the bravery, integrity and professionalism of our people and illustrate how we’re delivering the service the public expect and deserve.

“We celebrate our staff and their achievements, and this is a very visible sign of how we value and respect our people and their mahi.

“Its position at the RNZPC means recruits can be inspired and take pride in the achievements of the people who came before them.”

Visitors will be able to read brief details and scan a QR code to get more information, including audio accounts.

The Police working party included Rowan, Senior Sergeant Rob Rutene and Inspector Owen Maurirere from the RNZPC, and Rob Lee from Media and Communications as editor and web liaison.

They and our partners from Ngāti Toa worked with design specialists Story Inc.

“We had been using the working title Home of the Brave, but Ngāti Toa gifted us the name He Toa Taumata Rau,” says Rowan.

“They selected Tama Coker as our liaison and put us in touch with carvers Nathan Rei and Hermann Salzmann. They loved the ideas Story Inc put forward and we fleshed out with them what we wanted the installation to achieve.

“We wrote the narratives using the award citations as a basis, had them translated into te reo Māori, recorded the narratives in English and te reo, found photographs of everyone and created a website.

“Because there was so much information we decided to use a QR code so we could make the physical design as sleek and uncluttered as possible.” 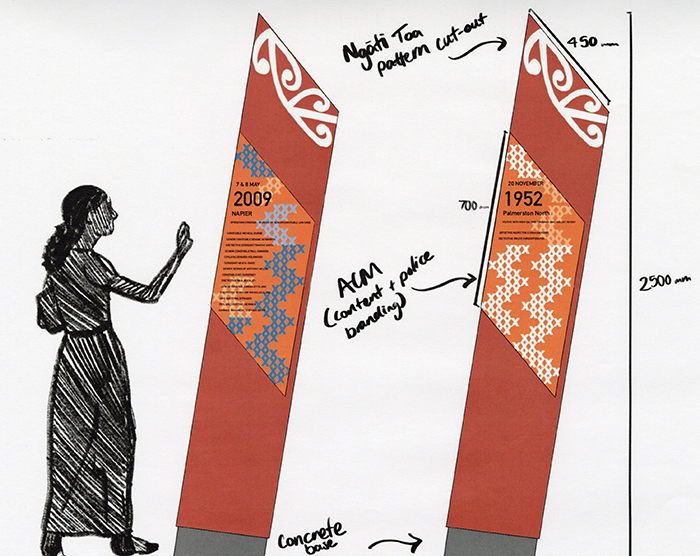 Plans for the pou.

Visitors will be greeted at the start of the walk by a carved tōtara pou, representing a warrior’s wero challenge.

The steel pou will stand 2.5 metres tall on a concrete base and follow the chronological order of the events, with the most recent at the lower end of the path. They will be uplit at night.

The tops feature water-cut designs by Nathan Rei: the mangopare representing the hammerhead shark, revered for its strength, courage, fighting spirit and determination to live; alternating with the puhoro, a split koru pattern symbolising courage, speed and strength.

At the end of the walk will be a pou whakamaumahara, a traditional structure erected to memorialise a person, group of people or a significant event.

The installation is designed so further pou can be added.

“There are faces you’ll recognise and some you won’t – we should be honouring all these extraordinary people.”

Work at the site continues and He Toa Taumata Rau will open in 2022.